The Advantages of Ruby Web Development

Ruby was created by Yukihiro Matsumoto in Japan and launched in 1995. The purpose of Ruby is to make web application creation easier and more fun for developers. In addition to this, Ruby incorporates design choices previously unseen in other programming languages, namely, incorporating a ‘human’ element into the way developers write and understand their code. For this reason, Ruby web development is considered incredibly easy to learn and master, as the code is written in a way that closely matches the way people speak. Thus, the separation between ‘human’ and ‘machine’ speak is reduced, which enables the code to be understood easily. 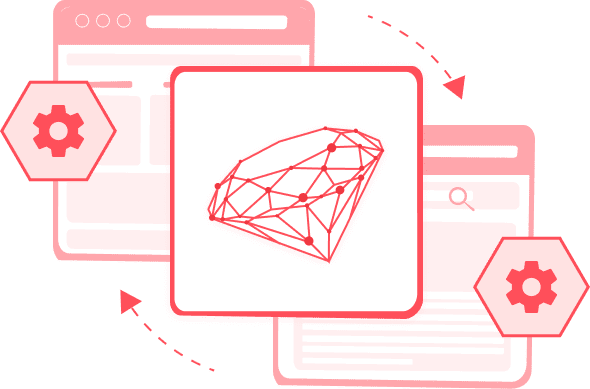 Jam-packed with libraries and frameworks 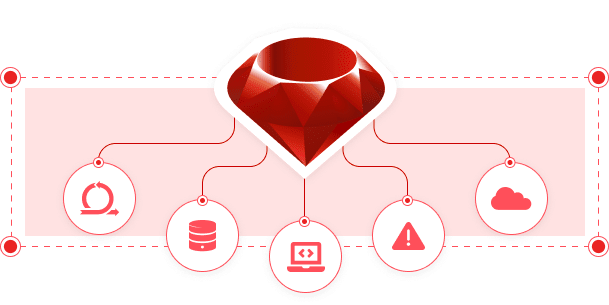 Ruby is also jam-packed with tons of other great features, such as over 30,000 (and growing) libraries (otherwise known as frameworks).

Frameworks like Ruby on Rails (RoR) enhance the capabilities of the vanilla Ruby programming language by a considerable amount. It features a massive amount of pre-written code templates, which users can drag and drop into their project in a matter of seconds. These templates are referred to as ‘Gems.’

So, if a Ruby web developer wants to incorporate social media buttons, interactive forms for customers to fill out, or any other kind of web application, there is a high chance that they can find the right Gem and use it in their project.

This is much faster and more efficient way to code compared to writing all your code from scratch, which in turn, helps speed up the development cycle and results in a faster turnaround. 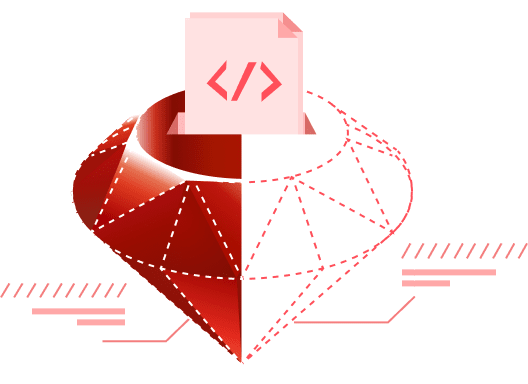 Another great advantage to Ruby is that it’s an object-oriented language.

What does that mean? It means that every aspect of a given Ruby project is treated like an object. It enables you to give each object in your project a unique name, label, class, characteristics, and ways in which it can interact with other objects.

The best way to explain this is to use the analogy of a car. Let’s say you want to create a car in Ruby. By doing so, you label the object as a car, and you give it unique attributes which apply to that car only. This might mean giving it a unique year, make, model, brand, colour, and other distinct accessories like tires, wheels, horsepower and other features. This is similar to creating codes in Ruby.

By giving your code this information, you can then use this code as a template to create other codes in your Ruby web development project. In simpler terms, as opposed to creating a new car from scratch, you simply copy and paste the information for this car, and then modify those details to create an entirely brand-new car. Make sense?

This is what makes object-oriented programming so appealing. It allows you to clearly identify the type of data you are working with, define how it interacts with other objects in your project, and define how the object exists within the context of the project.

With all that being said, is Ruby only useful for creating web applications? While that was the original intent for Ruby back in 1995, over the years, it has become the go-to programming language for all kinds of projects and applications.

The possibilities of Ruby are virtually endless, and with the number of libraries and frameworks growing each year, things are only going to get even more exciting.

Is outsourcing your Ruby web development right for you?

At this point, you’re probably asking yourself, “How do I know if Ruby is right for my project?” This is a great question to ask, as the language you choose has a significant impact on not just the quality of your development cycle, but also the end product.

Ruby is used by some of the biggest companies in the world to power their applications and ideas, including AirBnB, Fiverr, Basecamp, Github, and even streaming services like Hulu. So, whether your project is big or small, simple or complex, there’s a good chance that the right Ruby web development team will deliver fantastic results for you.

On top of this, Ruby has a long, long history of stellar support and documentation. This makes it easy for developers to troubleshoot common issues, and find unique solutions to otherwise complex problems. Thus, you’ll experience far less road bumps and hiccups during the development cycle, and it’ll be easier to implement patches, updates, and major upgrades to your application.

Last, but not least, Ruby is incredibly versatile, and powerful enough to bring even the most ambitious ideas to life. There’s a reason why some of the biggest powerhouses in the world use Ruby, and why they will continue to do so for many years to come.

So, if you’re working on a project, and need developers who use a programming language that is lightweight, scalable, easy to use, popular, and contains a wealth of libraries and frameworks, then Ruby is an excellent choice for you.

For a free price estimate for your next Ruby application development project, contact us. You’ll receive a fast and friendly response from us within 3 business days.